Algemeiner: Secretary of State Antony Blinken told Palestinian Authority (PA) President Mahmoud Abbas on Monday that the US is committed to reopening the Jerusalem consulate, a readout of the call published by Wafa, the PA’s official news agency, claimed.

The top US diplomat also stressed that the Biden administration rejects settlement activity in the West Bank and settler violence against Palestinians, as well as home demolitions and evictions, the agency said.

“Secretary Blinken conveyed President Biden’s greetings to President Abbas and his affirmation of the US commitment to the two-state solution and the importance of creating a political horizon,” the Wafa recap read.

Abbas told Blinken of the importance of “ending the Israeli occupation of the land of the State of Palestine,” while ticking off a list of other grievances against the Jewish state.

Opinion: It’s the same old story. Secular Jews have no interest in what their Scriptures say about the land of promise being strictly for the Jews. They have no idea that when Jesus Christ returns for 1000 years of peace, He will reign from the Temple Mount, in Jerusalem, and none of the enemies of God’s people will be there. That matter will be settled in the 7 year tribulation. 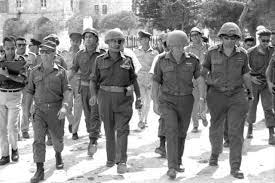 It sounds so simple. Let the Edomites have a consulate in Jerusalem, even though it gives legitimacy to their claim to the Temple Mount where they now have 5 mosques. What’s the harm? Must have been the same thinking when in 1967 after a miraculous victory of a rag-tag Israeli army over the heavily armed armies of Egypt, Syria and Jordan, Israeli secular General Moshe Dayan handed control of the Temple Mount to the Jordanian Waqf.

And it must have been the same thinking in 2005 as secular Prime Minister Ariel Sharon who decided to give the Gaza strip to Yasser Arafat and his henchmen in exchange for peace that didn’t last even 24 hours. For his role in removing 8000 Jewish families from their homes, Sharon fell into a coma one year later and never recovered (Genesis 12:3).

“I will bless those who bless you,
And I will curse him who curses you;
And in you all the families of the earth shall be blessed.”

What secular Jews miss are hundreds of prophecies that have been in plain sight in their Scriptures for over 3500 years. Isaiah, who lived in approx. 750 BC and prophesied the end from the beginning (Isaiah 46:10), asked this startling question:

“Why is Your apparel red,
And Your garments like one who treads in the winepress?” Isaiah 63:2

Who was Isaiah talking to and in what time frame would this prophecy be fulfilled?

For the answer, we back up to Isaiah’s first question (63:1)

“Who is this who comes from Edom,
With dyed garments from Bozrah,
This One who is glorious in His apparel,
Traveling in the greatness of His strength?”

“I who speak in righteousness, mighty to save.”

Only one Person can save, the Lord Jesus Christ. He answers the prophet:

Notice where Jesus comes from, Edom, where God’s enemies will be at His second coming (Revelation 19:13-16).

“He was clothed with a robe dipped in blood, and His name is called The Word of God. 14 And the armies in heaven, clothed in fine linen, white and clean, followed Him on white horses. 15 Now out of His mouth goes a sharp sword, that with it He should strike the nations. And He Himself will rule them with a rod of iron. He Himself treads the winepress of the fierceness and wrath of Almighty God. 16 And He has on His robe and on His thigh a name written:

KING OF KINGS AND
LORD OF LORDS

Internet Shutdowns Increasing as the Authoritarian Weapon of Choice