US views on EastMed pipeline have ripples for Israel-Greece ties

Assessment: That cancelling the pipeline would benefit Turkey’s maritime drilling  vessels in the area, and loosen Russia’s stranglehold on European Energy outweighed the financial benefit to our only ally in the Middle East Israel, is typical Biden foreign policy …

US opposition to a pipeline from Israel to Greece via Cyprus will have ripples across the Mediterranean.

Although the concept has been around for years, it gained momentum in January 2020 during a trilateral summit between the three countries of the “Energy Triangle.” It was opposed by Turkey, which sought a deal with Libya that would cut across the pipeline in vast Turkish claims over the seas.

“I will bless those who bless you,
And I will curse him who curses you;
And in you all the families of the earth shall be blessed.” Genesis 12:3 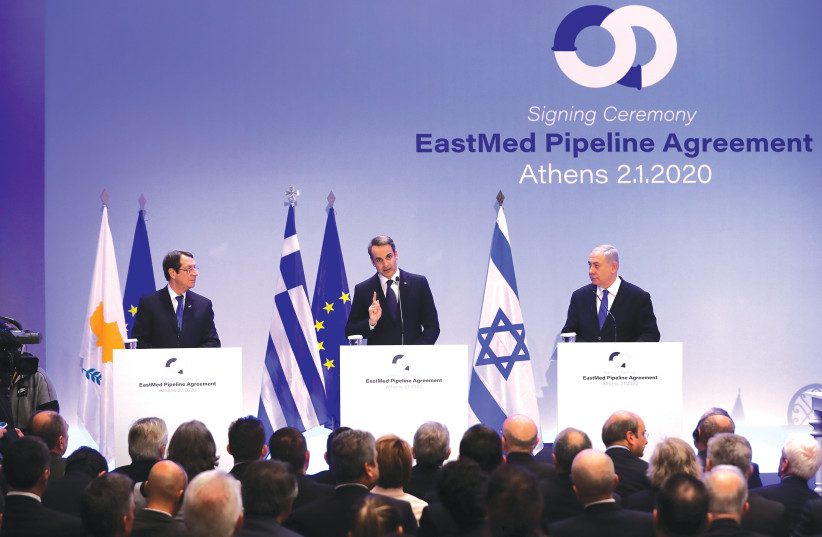 The new US administration has voiced misgivings and no longer supports the pipeline according to reports that first emerged in Greece and have now been confirmed.

Turkish right-wing media which is pro-government has celebrated the US comments. While Turkey’s ruling party hosts Hamas and is anti-Israel and anti-American, it also wants to sabotage Israeli-Greek ties and isolate Israel politically in the region.

Whether this means that countries like Turkey, which have supported terror attacks against Israel and vowed to “liberate” Jerusalem for the Palestinians, will now have more leverage over Jerusalem, remains to be seen.

US views on EastMed pipeline have ripples for Israel-Greece ties  https://amos37.com/us-views-on-eastmed-pipeline-have-ripples-for-israel-greece-ties/