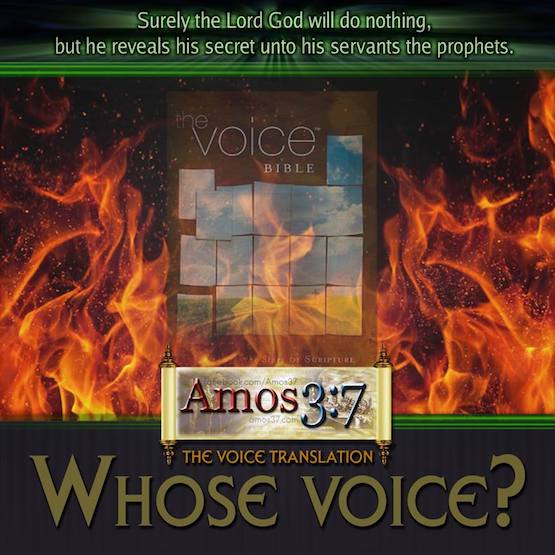 Emergent church leaders such a Brian McLaren and Chris Seay in conjunction with a pack of poets, songwriters and storytellers have just released a new “translation” of the Bible that they claim is a “fresh expression of the timeless narrative known as the Bible”. The name of this fresh “translation” is The Voice and it claims to be a dynamic translation of the Bible. Unfortunately, not since the release of the Jehovah’s Witnesses’ New World Translation of the Greek Scriptures in 1950 has there been a bible published that so blatantly mangles and distorts God’s Word in order to support a peculiar and aberrant theological agenda. Please See James Sire’s Scripture Twisting Methods of the Cults

Review of The Voice New Testament – Part One

I recently purchased a copy of this fresh “dynamic translation” of Bible and spent some time doing comparative work with key passages of the New Testament from The Voice, The ESV and the Greek text. Sadly I must report that this new Emergent “translation” is so far off the mark that I think one could reasonably argue that by producing their own distorted version of the Bible the Emergent church has crossed the line from being a ‘movement’ to actually becoming a cult.

The Impact of the New Age Movement in The Church

Over the next few posts, I will review selected passages of scripture from The Voice. The passages that I’ve selected touch on important non-negotiable Christian doctrines. As you will see, The Voice inserts peculiar teachings into the text that do not belong. The end result of these ‘insertions’ is a text that obscures the gospel, distorts Jesus substitutionary work on the cross, teaches Pelagianism and promotes a liberal form of works Righteousness.

The Voice claims that it is “based on the earliest and best manuscripts from the original languages.” However, it employs the use of italicized words that the translators admit are not in the original text. They claim that those italicised “words or sentences may contain information that would have been obvious to those originally addressed in the Gospel or letter and are meant to help the reader better understand the text without having to stop and read footnotes.” It is primarily through this device that The Voice smuggles false doctrine and teaching into the Biblical text.

Note: for each passage, I will produce a side by side view of The Voice, including italics, the ESV and the original Greek. (I apologize if you don’t read Greek. As needed I will explain why The Voice is not correctly translating the Greek and will do so in a way that will be sensitive to the fact that most people don’t read Greek)

I’ve bolded and underlined words in The Voice that are problematic and highlighted words that are outright wrong. My commentary follows below.

Verse 10 – This verse takes a lot of unwarranted liberty with the text. There are no verbs in the greek that support their insertion of the words ‘call out’ and ‘speaks clearly’ as evidenced by the fact that The Voice uses italics for these words. Neither words are supported nor implied in the original text which leads me to ask, by what objective criteria did the translators of The Voice use to determine that these words “would have been obvious to the original readers of this Gospel?”

Verse 11 – This verse has some very serious problems. In this verse the translators of The Voice build on the originally italicized words ‘call out’ and ‘speaks clearly’ which they injected into verse 10. In verse 11 they add the idea that The Voice (their unfortunate translation of the Greek word logos) utters only truth and that people refuse to listen. Again they’ve added these words in italics but I can see no reason why we should think that the original audience would have assumed these thoughts. What is even more troubling is that the translators have Jesus speaking to us through an ‘inner calling’. This is neither supported nor implied by the Greek text yet they do not have the words ‘inner calling’ italicized.

The true theological thrust of the opening statements of the Gospel of John is the incarnation of Christ. In verse 11 John tells us that the Incarnate Word came to his own creation and his own creation did not receive him.

For the record, God speaks to us through his written word not through ‘truth speaking inner callings’.

Verse 12 – This verse builds off of the disembodied ‘inner calling’ that was injected in verse 11 and says that we are reborn as Children of God if we hear and trust the disembodied Divine Voice and embrace Him.

Verse 13 – This verse wrongly inserts the words “we can only be reborn to God by accepting His call.” Even though these words are italicised, this is a VERY serious error and insertion. Not only can this not be supported from the original languages, the Greek text itself categorically rules out the possibility that humans can ‘accept His call’.

In verse 13, the Apostle John under the inspiration of the Holy Spirit writes of the new-birth that “oude ek thelematos sarkos oude ek thelematos andros”. Simply translated this statement says tht the new birth is NOT “of the will of the flesh or the will of man”. These words utterly rule out the possibility that man can choose, will or accept the call of God.

By adding the words “we can only be reborn to God by accepting His call” the translators of The Voice have inserted the Pelagian heresy into the text of scripture. They may attempt to defend this by pointing out that the words were italicized. But that defense would not fly because the translators claim that the italicized words would have ‘been obvious’ by the originally intended audience of the gospel. Since the translators italicized words that outright contradict the clear teaching of the passage itself there is no way that these inserted words would have been obvious to the original readers. As you can see these italicized words are clearly being abused in a way that obscures the real meaning of the passage.

Verse 14 – The Voice again adds very bizarre mystical concepts into this passage that cannot be supported by the text. The italicized words “The Voice had been an enigma in the heavens” are not only absent from the original text, they end up obscuring the simple and poetical language of John’s narrative that reveal that God became flesh and dwelt among us. Notice also that The Voice widens the idea that God dwelt among us (which focuses on humanity) to instead say that He chose to “live surrounded by His creations”. (These words should have been italicized but are NOT)

The Apostle John provides us with this incredible picture of God coming to fallen humanity in the flesh and full of grace and truth (one can scarcely miss how John’s description of Jesus’ coming sounds like a loving and caring father who has returned from a long trip away from his children and he’s loaded with love and hugs and presents for his children) while The Voice’s translation keeps Jesus locked in enigma as some type of guru that embodies the “perfect balance” of grace and truth.

This passage is just one of scores of passages that this new Emergent ‘translation’ of the scriptures completely biffs.

I will provide further examples of the Voice’s duplicity in the days ahead. 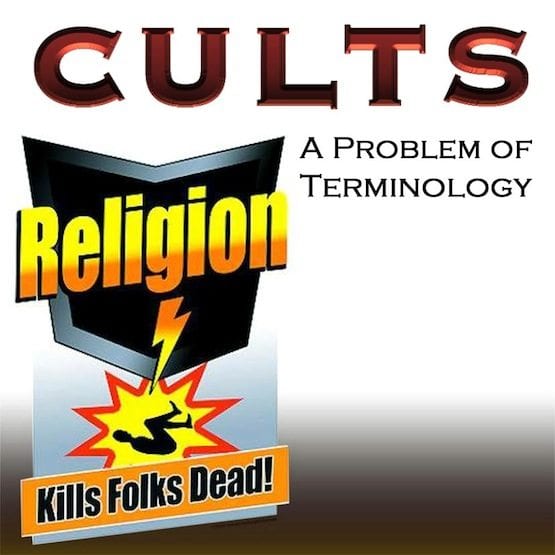 What makes a cult a cult 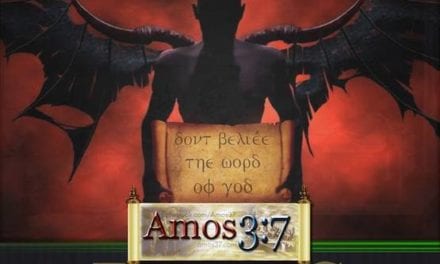